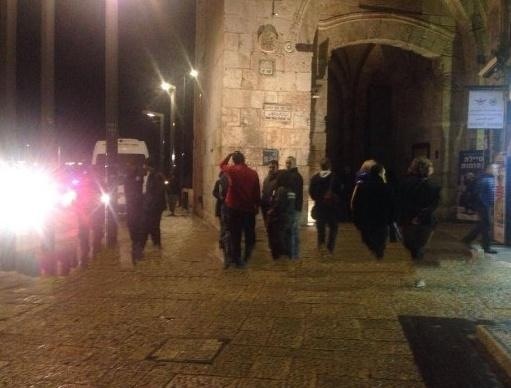 21:16:
The 32-year-old avreich told Walla News that he was walking with a Gemara and the three Arab males were waiting for them in a dark corner. “It was pitch black” he explained. His friend sustained moderate injuries.

“Three Arabs jumped on us. We did not see a thing. He shouted something against Jews. I did not see a thing. One of them cut me with a knife or another metallic object. It was a miracle – it was near the heart. My friend continued fighting them until he collapsed. I kept thinking how am I going to survive this and then I found myself on the ground”.

20:28:
It is now reported that two Jews were arrested in connection with the stabbing. As stated earlier, it has yet to be conclusively labeled a terror attack.

20:02:
Police report that three Arab suspects were taken into custody a short time ago, all residents of the Old City. Once again it appears Arab residents of the capital are responsible for a terror attack.

19:06:
It appears that two of the avreichim were stabbed. A man in his 30s is reported in light condition with an injury to the neck area and a second victim, in his 40s, is listed in moderate-to-serious condition with a stab wound to his abdomen.

18:59:
Police report three talmidei yeshiva were attacked in the Old City and one stabbed. The victim is in light condition according to police. The attacker is in custody.

18:57:
The victim told police he was stabbed by an Arab. A search for the attacker is underway at this time.

18:51:
A man reportedly in his 40s was stabbed and now listed in moderate-to-serious condition. He managed to get himself to the nearby Kishleh police station. The victim is being transported to Shaare Zedek Medical Center.

18:43:
The man is being treated by Magen David Adom EMS personnel in the police station. The incident is presumed to be a terror attack but this has not been determined with absolute certainty at this time.

18:39 IL: An Israeli male was reportedly stabbed in his abdomen near Jaffa Gate a short time ago. He was transported to nearby Kishleh Police Station, reportedly in moderate-to-serious condition.