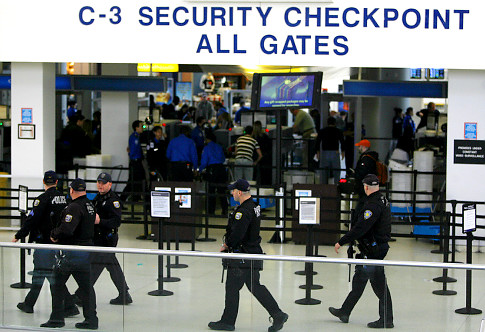 Federal agents who guard the border and screen passengers at airports would be exempt from new racial profiling guidelines that must be observed by the FBI and other law enforcement agencies. The Obama administration is to announce those guidelines in coming days, but officials say the changes would curtail numerous federal agencies from considering factors such as religion and national origin during investigations.

A U.S. official familiar with the guidelines said Friday night that the new rules banning racial profiling exempt the Transportation Security Administration and also do not cover inspections at ports of entry and interdictions at border crossings. The official was not authorized to discuss the guidelines by name and spoke on condition of anonymity ahead of a formal announcement expected soon.

The new guidelines apply to federal law enforcement agents but aren’t binding on local police departments whose officers who are more likely to have day-to-day contact with community members. Their formulation also long predates the high-profile cases, such as the police shooting in August in Ferguson, Missouri, that have placed police treatment of minorities in the spotlight.

But the guidelines are nonetheless a significant legacy for outgoing Attorney General Eric Holder and come during a time of national reckoning about racial bias in law enforcement and community relations with police.

“This new guidance will codify our commitment to the very highest standards of fair and effective policing,” Holder told an audience in Atlanta on Monday night in previewing the announcement.

Federal law enforcement agents are banned from routine racial profiling under a 2003 Bush administration policy that created a significant exemption for national security investigations. The new policy will go beyond the decade-old one, expanding the definition of racial profiling to ban the practice on the basis of characteristics including religion, national origin and sexual orientation, the official said.

The American Civil Liberties Union said the inclusion of those categories represented a “significant leap forward” in guarding against profiling.

But the guidelines will not end the FBI’s ability to collect racial and ethnic information about neighborhoods, a practice known as “mapping” that has long disquieted civil liberties advocates, said Laura Murphy, director of the ACLU’s Washington Legislative Office.

“In essence, the guidance is a major improvement, but it’s not sufficient,” she said.

The outlines of the guidelines were first reported by The Washington Post on Friday night.

The guidelines apply to law enforcement agencies within the Justice Department, including the FBI, the Drug Enforcement Administration and the Bureau of Alcohol, Tobacco, Firearms and Explosives, said the U.S. official. The official added that the Department of Homeland Security — which handles airport and border security, among other priorities — objected to being subject to the same rules.

ACLU officials said they were troubled that the protocols wouldn’t apply to Homeland Security components who serve at the border or in airports, saying that exemption would disproportionately affect Latinos and religious minorities.

“Focusing on an entire class of people instead of on actual conduct is unfair and harms our national security by wasting scarce government resources and eroding minority communities’ trust in government,” the group said in a statement.

Holder has made civil rights a cornerstone priority as attorney general, and the issue has taken on added importance in recent months with the Ferguson case and the July death of Eric Garner, a New York man who was placed by a police officer in what appeared to be a chokehold. Local grand juries declined to indict the officers in both cases.

Still, given the guidelines’ emphasis on federal law enforcement, it’s not clear how they would affect routine practices of local police.

“Based on what we know about the changes that are coming out, I’m not sure how it ties into the Eric Garner/Ferguson issue,” said Faiza Patel, co-director of the Liberty and National Security program at the Brennan Center, a public policy and law institute. “In both of those cases, you had local law enforcement that was involved in the incidents, and the guidelines don’t regulate state and local police.”