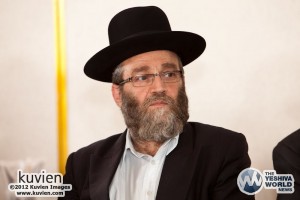 Gafne begins by saying “we just completed two most difficult years with all the gezeiros and I am glad, not emotional, to return to my job as chairman of the Knesset Finance Committee”.

Gafne responded to a question explaining that as in the past, he will concern himself with the entire nation, not just the chareidim in his capacity as committee chair, as he past record testifies. He adds this is not to say he is not going to concern himself with the chareidim, but this does not have to be and will not be at the expense of others.

Many say go learn how to run politics like Yahadut Hatorah. What is your secret to the impressive achievements the party attains?

I hope those who say this are complimenting it and are sincere. There are others who use this to take a swipe at us. The negotiations were handled by the senior party officials as we take the talks with the utmost of seriousness. We did not achieve all of our goals but we are pleased with the outcome.

To us it appears you achieved everything.

This is not the case. We had 17 meetings, long and serious meetings. There are items which we hope to achieve during the tenure of the administration. We have achieved the major issues, for if not we would not have signed on to the coalition.

It can give a number of successes of the discrimination that we worked to correct. For example, Sderot children received summer camp because of the difficult conditions in the city from rocket attacks, which we hope will not return. The summer camps did not include chareidi children however. Another example is chareidi kindergarten teachers less of a salary than a counterpart in the non-chareidi system and these are some of the wrongs that must be corrected.

We can say more or less that the gezeiros of Lapid/Bennett have been eradicated and that is our biggest achievement. Lapid did his best to strike out at us and he was successful to an extent.

What happened that you ran ahead and did not wait for Shas? You signed and Shas is still negotiating

I personally and others met with Shas officials and I spoke with Aryeh Deri personally. It was decided that regarding the positions each of us will be independent of the other as it was in the past. It cannot be any other way.

I truly hope Shas will enter and B’ezras Hashem we will continue working with one another. Whatever the case, we are not going to reopen talks, first and foremost it is not our job but the prime minister’s job. Even if Shas does not enter we are done negotiating and we have our agreement in hand. The coalition would then be 61 instead of 67. (This is based on the assumption that Yisrael Beitenu, Kulanu and Bayit Yehudi enter the coalition).

Regarding criticism against Yaakov Litzman as Health Minister, Lapid Minister, Yael German, failed miserably and overcrowding in the nation’s hospitals reached 300%. This was not the case under Litzman and he will work to correct the disaster left behind by Lapid’s minister. Lapid simply does not know how to plan or run things.