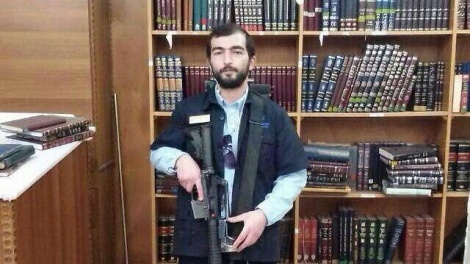 Talmid yeshiva Simcha Chodotov z”l was killed last week near the Jerusalem central bus station when he was mistaken for an Arab terrorist. His mother is sitting shiva in Petach Tikvah and few are coming to be menachem aveil.

As Simcha was a veteran of Nachal Chareidi, the Netzach Yehuda NGO is calling out to the tzibur to come and be menachem aveil. The Netzach Yehuda statement to the media states “The mother arrived in Israel a few weeks ago and a sister is in the process of obtaining citizenship. They are sitting shiva alone and almost no one is coming” explains Colonel (reserves) Yonatan Branski, who is the NGO’s CEO. He adds “They are like all of us as they do not understand exactly what occurred and how and where they will continue here”.

Branski explains the NGO is doing what it can to support the family at this most difficult time.

Simcha moved to Israel ten years ago and learned in Yeshiva Dvar Yerushalayim in the Har Nof area of the capital. He entered Nachal Chareidi as a lone soldier. After completing IDF service he worked as a security guard in a kindergarten in Jerusalem.

The shiva is at 77 Pinskar Street in Petach Tikvah. The shiva ends on Sunday morning 19 Cheshvan.