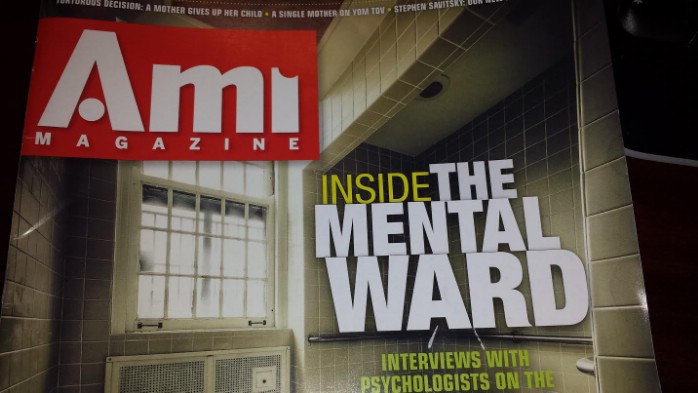 Generally speaking, we should be open and tolerant of views and interpretations of others that may differ from ours.

BREACH IN THE MESORAH

Sometimes, however, when we perceive a breach in the Mesorah of the interpretation of a passage in the Talmud and it is presented as fact, it is incumbent upon others to vocalize their dissent. This is particularly true when the misinterpretation has no substantive linguistic indication to that effect within the text.

The essay in question stated that Rabbi Elazar, of the first generation of Amoraim, was suffering from mental illness. The essay was penned by Rabbi Yitzchok Frankfurter, the editor of Ami Magazine, whom I generally consider someone who would not misrepresent a Torah text. Nonetheless, the particular essay (issue 237 entitled “A Look Inside Psych Wards”) struck this author as troubling.

Rabbi Frankfurter based this assertion on a passage in Brachos 5b which states as follows:

There is an unfortunate tendency for people to, at times, get caught up in their mada studies, in their Kierkegaard, Nietzsche, and Rank philosophies, and then retro-inject them into various Gemorahs and Midrashim that they come across with forced readings. Existentialist psychotherapy is strictly an early 20th century phenomenon. Injecting this type of therapy into the interpretation of a Gemorah with no Meforshim backing it up is anachronistic.

The results are not just incorrect readings of Torah texts, but there are two other repercussions as well: There are grave methodological missteps where, for example, an early Amorah is labelled as someone who is mentally ill; and the traditions of the classical commentators on our texts are entirely ignored.

This Gemorah has been amply and adequately interpreted throughout the generations.

The Ran understands this passage to mean that “in a dark room” means that Rabbi Elazar, Rabbi Yochanan’s student was destitute. Rabbi Yochanan opened his hand in generosity.
The Or HaChaim HaKadosh, the Nesivos, and the Malbim all interpret “sleeping in a dark room” as headed toward his ultimate demise which is called “a dark room.” Rabbi Yochanan was thus attempting to inspire Rabbi Elazar not to give up his will to live despite the sufferings of his illness.

The Gedolei HaAchronim have given numerous interpretations throughout the centuries to this passage. Not one of them, however, suggested that Rabbi Elazar was suffering from mental illness.

THE SOURCES FOR THE AMI INTERPRETATION

Rabbi Frankfurter then juxtaposes a Mishna in Shabbos (29b) that discusses extinguishing a light on Shabbos because of a ruach rah, which the Rambam interprets as mental illness. He correlates the need to extinguish a light with the fact that Rabbi Elazar was in a darkened room. It is significant to note that no commentator correlates the Mishna in Shabbos with the Gemorah in Brachos. Also, Rashi provides an entirely different understanding of Ruach Rah which would entirely rule out any basis for correlating the two passages.

Rabbi Frankfurter’s “sources” for his interpretation are technically not true sources in the classical sense, rather they are inferences that Rabbi Frankfurter perceives within the text; namely that Rabbi Elazar was in a darkened room and the dialogue between the two Rabbis expressly underscoring the psychological aspect of his suffering. As we have seen, however, there are different interpretations of this idea.

The mental illness interpretation suggested in the Ami article, however, is not novel. Reform Rabbi Ruth Adar, suggested just such an interpretation last year in her blog. The point is that such interpretations are foreign to traditional Judaism. This is not a gratuitous attack. If the only fellow travelers on a path are Reform Rabbis when the topic was dealt with by our classical meforshim for centuries, then something is clearly wrong.

Ami Magazine has always stood at the forefront of defending Torah-true Judaism. This is an important mission, and ny and large they have met this mission suscessfully. The interpretation of this passage in a manner that stands in contrast to the Rishonim and Achaonim is a violation of what Ami Magazine stands for. In this author’s opinion Rabbi Frankfurter should retract the essay.