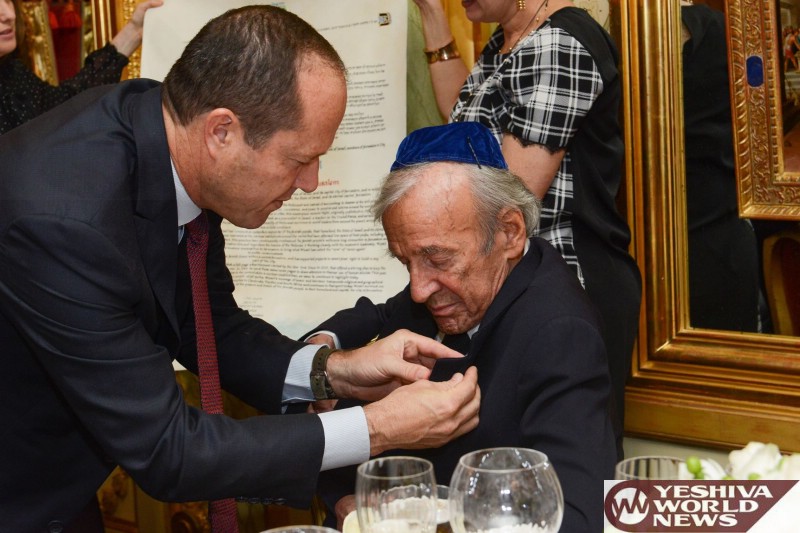 The following statement was released by Jerusalem Mayor Nir Barkat on motzei Shabbos upon learning of the petira of Elie Wiesel.

This was a sad evening for the Jewish people. Only a few months ago I had the distinction of bestowing Prof. Elie Wiesel with the “Honorary Citizen of the City of Jerusalem” award.

Wiesel, who survived the horrors of the Holocaust and witnessed the cruelty of humanity’s darkest hour, chose not to surrender or despair. Instead, he delivered a message of peace and tolerance for all.

The vast trove of Wiesel’s writing, which included dozens of books and literary creations, brought him the Nobel Peace Prize, and turned him into an unofficial ambassador of the Jewish people in general and Holocaust survivors in particular.

When I bestowed the award upon Wiesel, in an emotional ceremony, I said it was a great privilege to express the deep appreciation Jerusalem has for his heroism and his life’s work.

Elie Wiesel was a loyal ambassador and a true friend of Jerusalem, and has demonstrated unwavering support and empathy with the people of the city.

His ability to touch the hearts of so many enabled his message and life’s work for the Jewish people and Jerusalem to become global, influence millions, and change the world.

May his memory be a blessing.”

Jewish Agency for Israel Chairman Natan Sharansky and his wife Avital added:
“Elie Wiesel was the collective moral compass of the Jewish people. He was the first to break the silence surrounding the plight of Soviet Jewry, and he accompanied our struggle until we achieved victory. We will miss him deeply.”