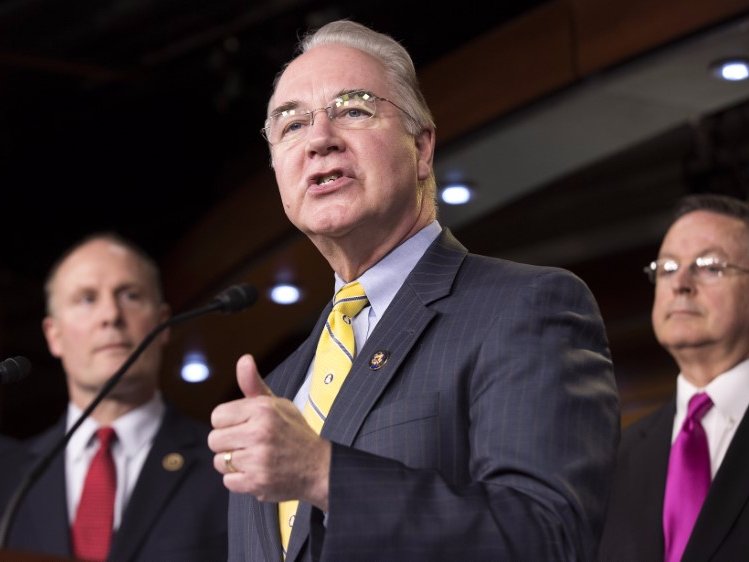 President-elect Donald Trump moved to fill out his Cabinet Tuesday, tapping Georgia Rep. Tom Price to lead the Department of Health and Human Services. Aides signaled that at least one other Cabinet nomination was imminent.

The president-elect appeared to still be torn over his choice for secretary of state. He summoned former Massachusetts Gov. Mitt Romney to New York for dinner Tuesday night to discuss the post for a second time. He was also meeting with Tennessee Sen. Bob Corker, the chairman of the Senate Foreign Relations Committee who was getting new attention from Trump’s team. On Monday, Trump spent an hour with retired Gen. David Petraeus, another new contender.

Trump’s decision to consider Romney for the powerful Cabinet post has sparked an unusual public backlash from some of his closest aides and allies. Campaign manager Kellyanne Conway has warned that it would be a “betrayal” to Trump supporters if he selected Romney, who was a fierce critic of the president-elect.

Three people close to the transition team said Trump was aware that Conway planned to voice her concerns about Romney in public and they pushed back at suggestions that the president-elect was angry at her for doing so.

Even as he weighed crucial Cabinet decisions, Trump appeared distracted by outside forces – or eager to create distractions himself. He took to Twitter early Tuesday to declare that “nobody should be allowed to burn the American flag.” He warned that those who do should face “perhaps loss of citizenship or year in jail!”

Trump offered no context for his message. The Supreme Court has ruled that flag burning is protected by the First Amendment.

The president-elect spent the weekend tweeting his opposition to a recount effort in up to three states that is led by Green Party candidate Jill Stein and joined by Hillary Clinton’s team. He also falsely claimed that millions of people had voted illegally in the presidential election and provided no evidence to back up the baseless charge.

Trump won praise from Republicans Tuesday for his pick of Price to serve as health and human services secretary. A six-term congressman and orthopedic surgeon, Price has been a leading critic of President Barack Obama’s health care law. If confirmed by the Senate, he’ll be a leading figure in Republican efforts to repeal the measure.

Incoming Senate Democratic leader Chuck Schumer said Price “has proven to be far out of the mainstream of what Americans want” for programs that help seniors, women, families and those with disabilities. His nomination, Schumer said, is “akin to asking the fox to guard the hen house.”

Trump’s team also announced Tuesday that Seema Verma has been chosen to be administrator of the Centers for Medicare and Medicaid Services.

Jason Miller, a transition team spokesman, said at least one other Cabinet post would be announced in the afternoon. He did not elaborate.

Transition aides said Trump was likely at least a few days away from a decision on secretary of state. Romney has supposed from Vice President-elect Mike Pence, who is heading the transition efforts.

Romney was fiercely critical of Trump throughout the campaign, including his preparedness for the foreign policy and national security decisions that confront a president. Still, he is said to be interested in serving in the administration and held a lengthy initial meeting with Romney before Thanksgiving.

Other top Trump allies, notably Conway, have launched a highly unusual public campaign against a Romney nomination. Conway’s comments stirred speculation that she is seeking either to force Trump’s hand or give him cover for ultimately passing over Romney.

Former New York City Mayor Rudy Giuliani, a loyal Trump ally, was initially seen as the leading contender to helm the State Department. But questions about his overseas business dealings, as well as his public campaigning for the job, have given Trump pause.

Trump is now said to be considering Giuliani to head the Homeland Security Department, according to those close to the transition process.