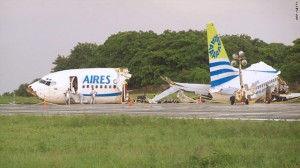 One passenger was killed when an airplane crashed in bad weather and split into two when landing early Monday on the island of San Andres, Colombia, officials said.

The number of injured remained unclear Monday morning, but the national police said six of at least 127 people aboard the plane were not hurt.

There also were conflicting reports as to how many people were aboard the Aires airline 737-700 jet when it crashed around 1:49 a.m. (2:49 a.m. ET). The Colombian national police initially said the flight had 131 people — 121 adult passengers, four minors and six crew members. A list the police later released, however, indicated 127 people on board — 121 passengers and six crew members.

There also was conflicting information about what caused the crash. The initial report from the national police said a downdraft may have shaken the airplane as it prepared to land. But Pedro Gallardo, governor of San Andres y Providencia state, told CNN en Español that lightning hit the plane. The pilot also reported a lightning strike, El Tiempo newspaper said.

A storm was reported in the area but not at the airport, Carrascal said.

The accident occurred about 260 feet (80 meters) before the start of the runway, Carrascal said. Wreckage was spread about another 328 feet (100 meters) on the runway, officials said.

Photos of the airplane on the runway show it split in two, with the nose and first eight rows of seat pointing in one direction and the rest of the aircraft almost pointing in the opposite direction.

The flight had taken off from Bogota, Colombia’s capital, shortly after midnight, police said.