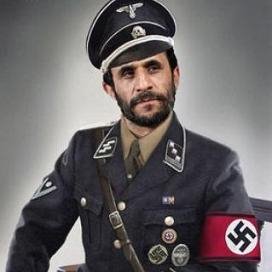 Iranian President Mahmoud Ahmadinejad is referred to as “Hitler” while President Nicolas Sarkozy of France is called a “naked emperor” in US documents released by Wikilieaks on Sunday.

Pages from the German newspaper Der Spiegel were leaked early, before a mass publication of thousands of secret cables by the whiste-blowing website. The documents also say that North Korean leader Kim Jong -il suffers from epilepsy.

The German Chancellor is referred to as Angela “Teflon” Merkel and Afghan President Hamid Karzai is “driven by paranoia”, the documents claim.

US officials referred to Russian Prime Minister Vladimir Putin as an “Alpha Male,” while President Dmitry Medvedev is “afraid, hesitant.”

Der Spiegel also quoteed the State Department as saying that President Barack Obama “prefers to look East rather than West,” and “has no feelings for Europe”.

The leak came minutes after Wikileaks claimed that it was under cyber attack on Sunday ahead of the expected release of thousands of secret documents.

On its Twitter feed Wikileaks said: “We are currently under a mass distributed denial of service attack.”

Wikileaks added that several newspapers would go ahead and publish secret United States documents even if the website crashed.

The latest leak is expected to publish US embassy reports on other countries and the website said it would be bigger than recent leaks on the wars in Iraq and Afghanistan.

The US state department has claimed that the release would put lives at risk but Mr Assange said America was afraid of being held to account.

Details of the documents were first released on Twitter after a member of the public in Germany purchases a copy of Der Spiegel which had been put on the news-stand too early.

The Foreign Office condemned the leak of the State Department cables but insisted that it would not damage British-US relations.

“We condemn any unauthorised release of this classified information, just as we condemn leaks of classified material in the UK,” a spokesman said.

“They can damage national security, are not in the national interest and, as the US have said, may put lives at risk.

“We have a very strong relationship with the US Government. That will continue.”

British officials fear that the confidential cables will reveal details of a secret operation to disrupt Iranian smuggling of nuclear materials through the Gulf and Turkey.

Officials involved in overseeing British policy in the region say that diplomatic materials compiled between 2008 and 2010 on Iran contained sensational information that could jeopardise efforts to disrupt the nuclear programme if unveiled on WikiLeaks.

The Italian Prime Minister Silvio Berlusconi’s “close relationship” with Russian counterpart Vladimir Putin, is also said to be among WikiLeaks documents due to be released.

Mr Berlusconi has been friends with former KGB agent Mr Putin, for more than five years and the two have held numerous bilateral meetings as well as entertained each other on holiday.

Of concern to Washington was said to be the deal between Italian energy firm ENI and Russian gas giant Gazprom, over the South Stream pipeline as well as the “very cordial relationship between Mr Putin and Mr Berlusconi”.