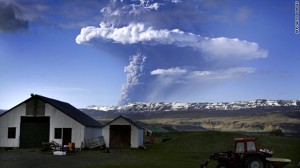 Scotland’s Loganair announced that all flights will be canceled Tuesday due to forecasts that indicate “a high density of ash will be present in large parts of Scottish airspace.” British Airways and Dutch airline KLM also canceled dozens of scheduled Tuesday flights to and from locations in Scotland.

The eruption forced U.S. President Barack Obama, who was in Ireland on Monday, to move up the departure for his next stop on a six-day European tour.

“Due to a recent change in the trajectory in the plume of volcanic ash, Air Force One will depart Ireland for London tonight. The schedule for tomorrow will proceed as planned,” White House official John Earnest told CNN.