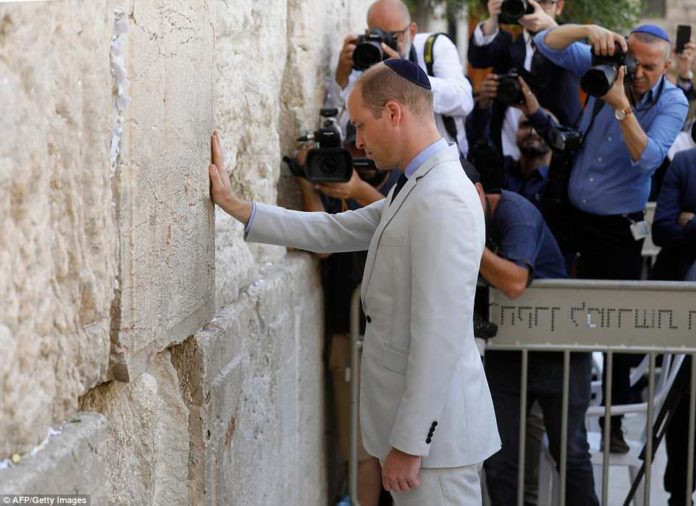 Prince William toured sensitive Jerusalem holy sites on Thursday and paid a pilgrimage to the tomb of his great-grandmother on the final day of his historic royal visit to the Middle East.

The Duke of Cambridge’s Jerusalem leg was by far the most charged of his five-day tour of Jordan, Israel and Palestinian controlled areas – the first official visit of a member of the British royal family – as he ventured into the heart of world religion and regional politics.

The trip has been carefully orchestrated as a non-political event, and the prince has been watchful in his words and actions not to stoke controversy as he met with Israeli and Palestinian leaders and toured the region’s various locales. But the Jerusalem sites he visited are central to the century-old conflict and every step he took was closely scrutinized.

Prince William began his visit with a lookout of the Old City from Har HaZeisim. He then visited the nearby gravesite of his great-grandmother, Princess Alice, who saved Jews in the Holocaust and whose last wishes were to have her remains buried in a Church.

At the Mount of Olives, The Duke of Cambridge views the Old City of Jerusalem. pic.twitter.com/irWcx94I1h

The prince stood solemnly by his great-grandmother’s grave, accompanied by a Russian Orthodox clergyman. With the homage, William followed in the footsteps of his father Charles, the Prince of Wales, and grandfather Philip, the Duke of Edinburgh, who had also visited Princess Alice’s grave.

A truly remarkable woman who risked her life to save Jews during the #Holocaust, honoured by @YadVashem as ‘Righteous Among the Nations’. https://t.co/9ni5ohsi8J

From the church, Prince William was taken to visit a trio of key Muslim, Jewish and Christian holy sites before returning home to London. Prince William said he was particularly looking forward to the Old City visit, which included stops at the Har HaBayis, the Kosel, and the Church.

At the Kosel, he was accompanied by the site’s rabbi and security guards as he approached the wall. Donning a blue Yarmulka, he placed his right hand on the ancient stones and then, following tradition, slipped a note inside its cracks.

The Duke of Cambridge visits the Western Wall. pic.twitter.com/sNQrAusPzh

He signed the guestbook with the following passage: “May the God of peace bless this region and all the world with peace”.

“Today we experienced a moment of history which will live long in the memory of Jews around the world,” said the Chief Rabbi of Britain Ephraim Mirvis, who accompanied the prince in his visit. “The Western Wall stands at the epicenter of our faith. To see the future monarch come to pay his respects was a remarkable gesture of friendship and a sign of the duke’s regard for the sanctity of Jerusalem.”

History is made as the Chief Rabbi accompanies HRH The Duke of Cambridge to the Western Wall in Jerusalem – standing at the epicentre of the Jewish world. pic.twitter.com/DrdMP158xO 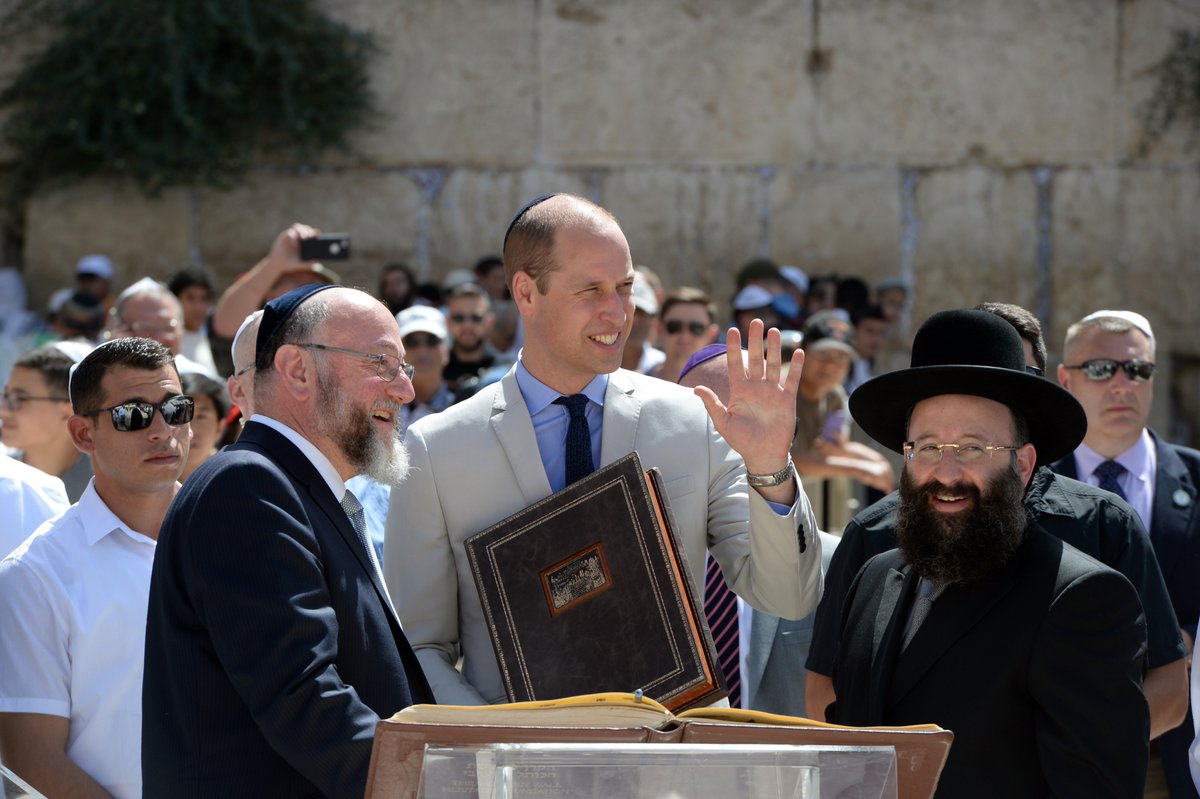 After the hour-long visit, he headed to Ben-Gurion International Airport and departed back to London.

Israeli politicians had been angered that the royal itinerary mentioned the Old City of Jerusalem as being part of “the Occupied Palestinian Territories,” rather than part of Israel’s capital. Jerusalem Affairs Minister Zeev Elkin – who is running for mayor of the city in this year’s elections – called the reference a “distortion” that cannot “change reality.” His fellow hard-line Cabinet minister from the ruling Likud Party, Miri Regev, said it was “impolite” of the prince not to meet Jerusalem’s mayor in the city.

[Prince William Visits the Kosel- Did He Get a Mitzvah?]

Britain has deep roots in the region, having governed Palestine from 1920 to 1948 under a League of Nations mandate. But it has since taken a back seat to the United States in matters of mediating war and peace efforts. The royal family has mostly steered clear of politics, and insisted the itinerary was merely reflecting the long-time, traditional vocabulary used by the British government.

The 36-year-old William, second in line to the throne, had already visited the Yad Vashem Holocaust memorial and met Israelis from all walks of life, from the beaches and promenades of Tel Aviv to demonstrations of high-tech entrepreneurs to swanky receptions with celebrities and politicians. He also visited a Palestinian refugee camp, where he met with young people and tasted the local cuisine.

The visit to Jerusalem capped days of a whirlwind tour seeped with symbolism that drew plenty of attention but offered much less substance.

Abbas Tells Prince William He Is Serious About Peace