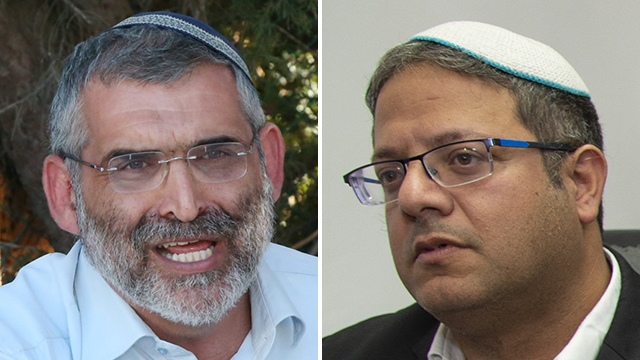 In spite of the fact that the Attorney General, Avichai Mandelblit, advised disqualifying the candidacies of Michael Ben-Ari and Itamar Ben-Gvir from Otzma Yehudit in the upcoming election, the Central Elections Committee judged in favor of the candidates and gave them the okay to run in the upcoming election. The vote in the committee passed by one and was decided by a vote of 16 to 15 in favor of having the pair run for the Knesset. At the same time, the Committee decided that the party as a whole, Otzma Yehudit, and the larger party of the United Right, resulting from the mergers of Otzma Yehudit, the Jewish Home and the National Union parties, may run for the Knesset respectively.

The request to disqualify the candidates was put forth by numerous parties on the left side of the political spectrum including Meretz, Labor and Yesh Atid.

Ben-Ari spoke this afternoon to the committee and responded to the petitions sponsored by Meretz’s Tamar Zandberg and LAbor party’s Stav Shafir calling for the pair to be disqualified from running for Knesset.

“Am I the dangerous man whom the attorney general thinks cannot be in the Israeli Knesset? I, whose eldest son is finishing his service in the Givati Brigrade, whose son is enlisting in another three weeks in the Armored Corps course? Is that the critical mass of evidence?” Ben-Ari wondered.

He added, “I have nine children, two of whom are named Binyamin and Talia. Binyamin was the son of my teacher and mentor Rabbi Kanahe, who was murdered by an al-Qaeda man.”

Ben-Ari told committee members the following. “Gentlemen, I’m not a racist, and certainly not any of the other ugly charges. You can turn Ben-Ari into a madman, and you can also relate to what I say clearly and coherently.”

The petitions made by Meretz and Labor were given more fuel when Attorney General Dr. Avichai Mandelblit on Tuesday submitted an opinion paper to the chairman of the Central election committee for the elections for 21st Knesset, retired Justice Chanan Meltzer, to prevent Dr. Michael Ben-Ari and attorney Itamar Ben-Gvir from running in the elections.

Mandelblit explained in his expert opinion that he feels Ben-Ari should not be permitted to run for a spot in Knesset due to his incitement and racist viewpoint as per Paragraph 7a (2) of the Basic Knesset Law.

Regarding attorney Itamar Ben-Gvir, who is also on the Otzma Yehudit list, Mandelblit’s position is that although the evidence in his case is very disturbing, and he approaches the field that prevents one for running for Knesset under the law, “in light of the stringent bar established in the Supreme Court’s ruling to disqualify a candidate for election, he too should not be permitted to run for Knesset.”

BeChadrei Chareidim adds that the reason for the request to disqualify Ben-Ari was because of various videos he had uploaded to Facebook over the past two years, including a series of statements about the Arab sector.

Last August, Ben-Ari said, “First of all, we have to change the equation that anyone who dares to speak against a Jew will not live, he is not being expelled, he is not deprived of citizenship, he is not alive as a firing squad kills him, wipes him out, as Arabs understand. This is their language.”

“This is a murderous people” Ben-Ari is quoted saying about Arabs in a video on Facebook following the Gush Etzion terrorist attack in which Efrat resident Ari Fuld HY”D was murdered. Mandelblit also mentions that following that murder, Ben-Ari called on all employers to fire Arab employees. Mandelblit states the main problem is will Ben-Ari as opposed to the others.

He cited how Ben-Ari calls for canceling the citizenship of Arabs and to remove them from the country. The attorney general places an emphasis on Ben-Ari, whom he says is racist and incites to violence, and therefore should not be permitted to run for Knesset.

Chairman of the Labor Party Avi Gabbai responded to the drama, supporting the position of the attorney general, adding “There is no place for Kahanists in Knesset”.

When the Central Elections Committee convened on Wednesday, March 6, 2019, it heard petitions from Zandberg and Shafir, who were confronted by candidate and attorney Ben-Gvir, and the meeting quickly turned chaotic. The committee also heard a petition to ban the Arab Balad party from the elections, because it does not recognize Israel as the state of the Jewish People, and it supports terrorist organizations.

Ben-Gvir also used the opportunity to attempt to serve Shafir with papers as he filed a libel lawsuit against her in the amount of 500,000 shekels, because she had compared his party, Otzma Yehudit, to Nazis.

It was pointed out that the Central Election Committee is comprised of representatives from the various political parties serving in Knesset, headed by retired judge.

The committee includes a number of chareidi representatives, including the vice chairman, attorney Moshe Arbel and Menashe Levi of Shas, Rabbi Avraham Weber of Degel Hatorah, attorney Avrami Yustman of Agudas Yisrael and Yossi Rosenbaum of the Likud.

In the course of the discussion, a representative of the Reform Center came up with a request to disqualify both Ben-Ari and Ben-Gvir. As soon as she began to speak, the five chareidi representatives rose and left the room in protest.