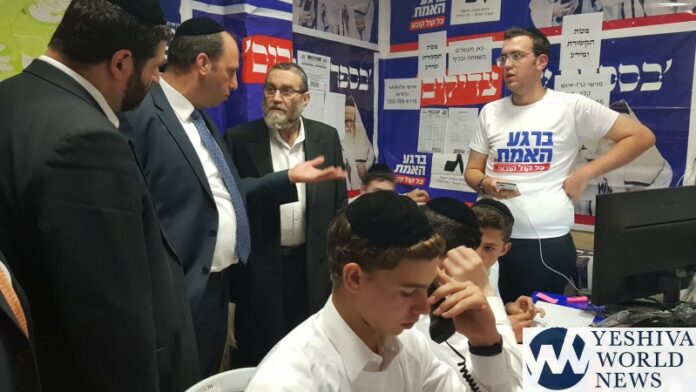 There is a fear of election fraud in the polling station that was operating in the Druze community of Yarka. The votes are to be tabulated on Monday or Tuesday, and the result may once again impact Yahadut Hatorah’s eighth seat, as it did in the previous election for 21st Knesset. This refers to Yitzchak Pindrus’ seat.

There were 14 polling stations in Yarka suspected of election fraud. The outcome will affect Pindrus’ future in the 22nd Knesset. In the community, most of the votes are for Likud, which lacks 3,000 votes for another seat as opposed to Yahadut Hatorah, which has 1,200 spare votes for the eighth mandate.

Likud is confident that the votes required for the party’s 32nd seat will come as a result of the review of voting in Yarka’s 14 voting stations, as these votes were not yet included in the voter numbers counted to date. Due to the suspicion of fraud in those polling stations on Election Day, the Central Elections Committee (CEC) gave the order not to include the Yarka votes in the final count pending an investigation. Based on Yarka’s previous voting record, most of the votes will likely benefit Likud, at the expense of the eighth seat for Yahadut Hatorah. This means if Likud receives 1200 votes over Yahadut Hatorah, the eighth seat will move over to Likud. Yahadut Hatorah officials do not believe this will occur.

In the 21st Knesset race, the eighth seat for Yahadut Hatorah was hanging on edge too, after claims by a Likud member, attorney Amit Halevi, that there was election fraud and in fact, Likud should have received a 36th seat at the expense of Yahadut Hatorah’s eighth seat, Pindrus’ seat.

The process was halted when PM Netanyahu dissolved the Knesset and called early elections.