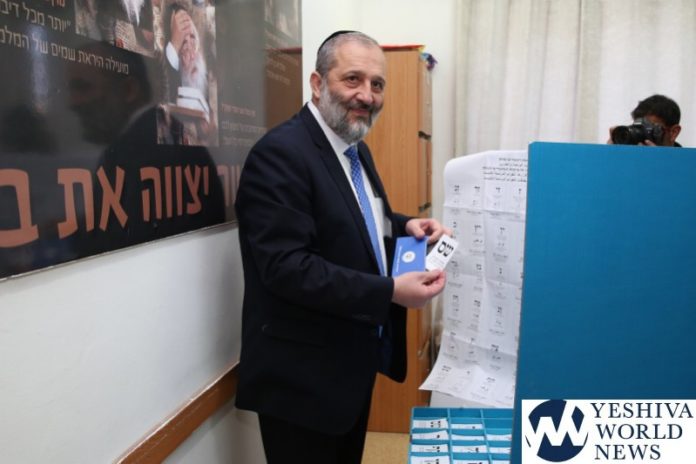 Shas party chairman Minister Aryeh Deri on Tuesday called on both Prime Minister Binyamin Netanyahu and Blue & White party leader MK Benny Gantz to prevent a third round of Knesset elections. Deri is pushing for the leaders of the two largest parties to find common ground and form a national unity coalition government.

“We mustn’t head to elections,” Deri cried, aware it would be the third Knesset election in less than a year. He said going to elections for a third time is almost “losing our minds”, as he addressed an event in the Naot Chovav Council.

He used words like “overcoming” and “finding solutions”, as he called on the nation’s leader and chief opposition MK to push differences aside amid an awareness the country is divided and new elections would cost billions of shekels, citing he is speaking as a member of the Security Cabinet, one who is aware of the security challenges, some of which are known, while most are not, hence a nation demanding stability.

Deri explains that the nation has been locked in a state of elections for a year and this directly impacts the functioning of government offices.

“I am sorry to have to call on the Binyamins” stated Deri, referring to Binyamin Netanyahu and Binyamin Gantz. “Sit in the room and do everything possible to prevent elections” he added, continuing, “The public will never forgive whoever did not work to prevent elections. There are 15 days remaining until [we will have to call] elections. The gaps are very small, and it is not a matter of left and right so we can get over them. We must do so.”