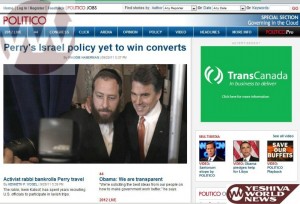 Is he pro Israel, or anti-Israel?

Did he make Prime Minister Netanyahu enter the Whitehouse through the backdoor, or did he not?

Did he talk to Netanyahu with his shoes up on the desk, or didn’t he?

Let’s say he did. Does that give Orthodox Jews in galus the right to take revenge against the President of the United States in front of his face?

Allow me to explain.

Republican presidential candidate Rick Perry held a press conference in Manhattan, on Tuesday morning, to blast President Obama for his Israel policy. He was flanked by Orthodox Jews, most of them wearing their black velvet yarmulkas, and stroking their beards. Perry accused President Obama of fostering a policy of “appeasement” in the Middle East, blaming him for the standoff at the United Nations over the Palestinian bid for statehood recognition.

His words were followed by cheers and laud applause by those who are  “Shomrei Torah Umitzvos”.

President Obama was across the street at the United Nations working feverishly to stop the Palestinians from declaring a state, and a group of men wearing Yarmulkas publicly gather to blast the President of the United States on live television. Talk about a chilul hashem. And don’t think for one second that most of them mean this “lishem shomayim” to defend Israel. They could not care less about Israel. They care about one thing and one thing only: chanifah towards Rick Perry lest he be the next President. Oh, and as an added bonus they get to pretend that they are machers for a day by getting their photo in a newspaper with the Republican Presidential frontrunner.

What did Obama do to deserve this? Promising to veto the Palestinian State wasn’t enough? How about saving a dozen Jews in the Israeli Embassy in Egypt last Shabbos? Where is the hakoras hatov?

And don’t worry. Rest assured that as the election gets closer, some of those very people on that stage will once again start their “get Pollard out of jail” campaign. Can you imagine the chutzpah?

In thousands of years of history there has never been a medina shel chesed like the United States of America, where we have such freedom of religion and, boruch hashem, prosperity as a community. We owe our country and President a little respect. Playing for cheap political points to help another candidate for President who conveniently supports Israel when he is running for office is shameful. We’re better than that. This is not what “Orthodox Jews” do.

Let me end by making myself clear. I did not vote for Obama in the last election, and will not be voting for him the next one either. This article is not about who I support, or whom I will be voting for. This is about Orthodox Jews deciding on their own to make a move which can potentially hurt the interests of millions of Jews around the world – both in Israel, and in the United States. Which Gadol sanctioned this event? Can anyone name him? Whatever happened to the rule that we have been following for thousands of years of “Lama Tisrau”?!

Charles Katz is an attorney practicing criminal law in New York, and above all a “god-fearing Jew”.