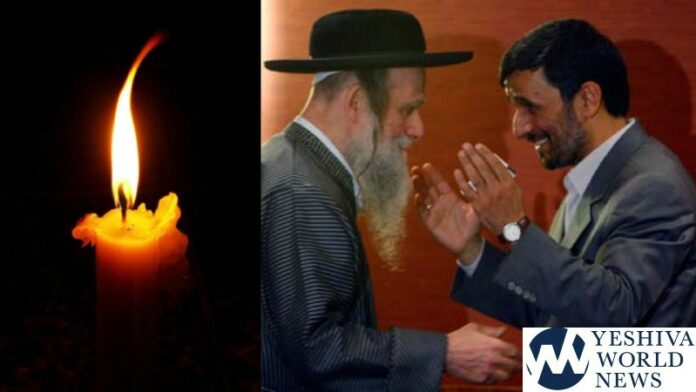 The leader of Neturei Karta in the United States, Moshe Dov Ber Beck, died on Thursday night. He was 87.

Beck was a fixture at every anti-Israel event in the Tri-State area for years, easily recognizable as he wore a Yerushalmi bekesha every day.

There was no statement released by the terrorist regime in Iran where Beck was a welcomed figure among the highest levels of Government.

Beck was born in Budapest, Hungary. His early childhood was spent hiding with his brother from Nazi persecution until 1945, when Soviet troops took Budapest. In 1948, he migrated to Bnei Brak, Israel, where he began yeshiva studies. In 1959, he married, and at that time joined Neturei Karta, leaving Vizhnitz of which he had formerly been a part. He left Israel in 1970 because, he said, of his strong opposition to Zionism, and has since lived in Monsey, New York, where he spent his time as a vehement anti-Zionist activist.

Beck, along with other terrorist-supporting Jews such as Yisroel Dovid Weiss, disguise themselves as Orthodox Jews and have literally kissed and hugged the most notorious anti-Semites of the globe. Beck travelled to Iran in 2006 with a group of his supporters to attend the Holocaust Denial conference, which was held by then Iranian-President Mahmoud Ahmadinejad, who frequently called for Israel to be wiped off the map.

In fact Mr Weiss told Ahmadinejad that he was “a light to the nations”, and that he was “exemplary” in his recognition of what Zionism really is and his warmth for Judaism. Watch the video below:

They have met with Iran’s Foreign Minister, to thank the world’s largest sponsor of Terror for “friendship” with Jews worldwide.

They met with Turkish President Recep Tayyip Erdoğan just days after he called Israel a “terror and apartheid state”.

He was expected to be buried in Monsey on Friday.