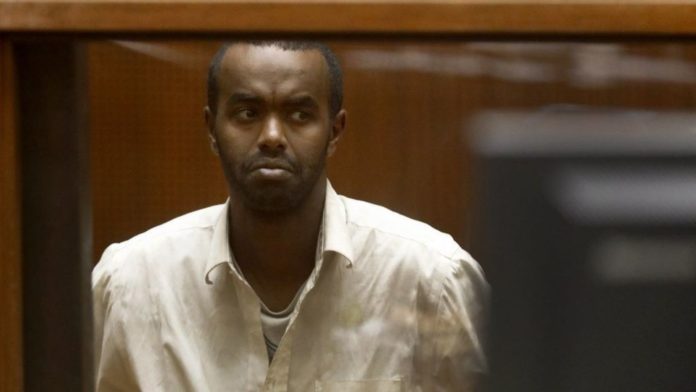 Prosecutors say a Seattle man accused of trying to run over two Jewish men outside a Los Angeles synagogue has been found competent to stand trial.

Investigators say Mohamed Abdi Mohamed yelled anti-Semitic remarks at the pair on Nov. 23, made a U-turn and drove at the men, who were on a sidewalk. Nobody was hurt.

A public defender had questioned whether Mohamed was mentally fit for trial. The Los Angeles Times says the 32-year-old was found competent during a hearing Friday.

The newspaper previously reported that Mohamed was diagnosed with schizophrenia in 2015.

He’s charged with assault with a deadly weapon, with hate crime allegations. Mohamed’s due in court again Monday to schedule a preliminary hearing.

Mohamed was arrested after crashing into another car in the largely Jewish Wilshire-area.

HATE IN #LOSANGELES – CAUGHT ON CAMERA: Several Orthodox #Jews were walking on Le Brea Blvd and Oakwood – in front of the Bais Yehuda Shul, when a vehicle drove past screaming anti-Semitic slurs at them. (2nd video) One of the victims told YWN the vehicle made an abrupt U-Turn (2nd & 3rd videos) and began hurling anti-semitic slurs before attempting to run over the group of identifiable Orthodox Jews. The vehicle sped off and was involved in a car accident at the intersection of Highland and Oakwood. (1st video) . The victim tell YWN that there was a Koran on the windshield, and the driver was of Middle-Eastern descent. Additionally, after the LAPD arrived at the scene of the crash, the man continued on his anti-Semitic rant.