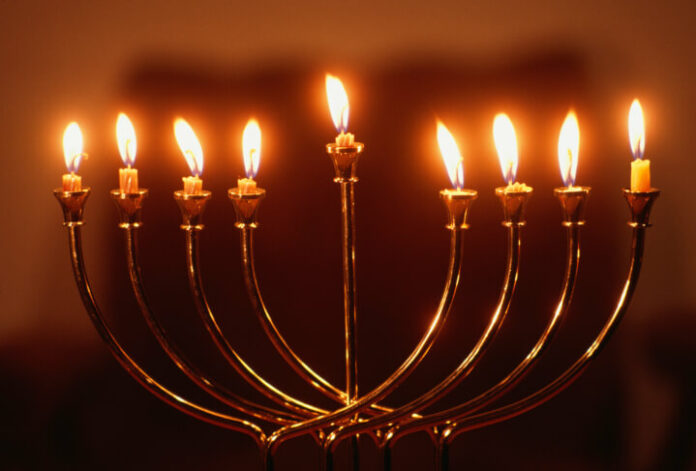 By the time most people usually get home from work, the time to kindle the Chanukah lights has already arrived.  And by the time the whole family gets together to actually light, another ten to fifteen minutes may have elapsed.  What’s the story with sneaking in a quick taste of those latkes before dinner?

The source of the prohibition of eating before the performance of certain Mitzvos is a Gemorah in Sukkah (38a).  From there we derive that the prohibition exists not only for Biblical Mitzvos but also for Rabbinic Mitzvos.  The Poskim extend the various prohibitions from the discussion found there.  Our interest now, of course, is Chanukah.

Before we get to Chanukah lights, let’s create some categories.  There are some Mitzvos where it is both forbidden to eat and even to taste before we perform them.  We will call these Category One No Pre-Food – Mitzvos. (We don’t want to call them Category One Mitzvos because the issue of eating before them is not synonymous with the type or level of the Mitzvah per se).

There are also Mitzvos where, it is forbidden to sit down to a meal before you do them, and ideally, one shouldn’t taste anything, but there is room to be lenient if one is feeling weak or one is sick.  We will call these Mitzvos Category Two No Pre-Food – Mitzvos.

And as in many issues of halacha, where exactly each Mitzvah fits in is often either a Machlokes or has not been clearly defined.  Another aspect that leads to much of the confusion is what are the general guidelines for how we are to categorize these Mitzvos?  Why are some of the Mitzvos okay to taste something beforehand, but it is not okay to eat beforehand?

What are some Category Three No Pre-food Mitzvos?

One example is the Mitzvah of davening Mincha (SA OC 232:4) where it is forbidden to eat a meal but it is permitted to taste.  Another example is the Krias Shma of Maariv (SA OC 235:1) or of Mussaf (SA OC 286).  These are all Category Three.

Before Sfiras HaOmer one can taste as well according to the (Kaf HaChaim 689:46).  Many shuls allow it before Tkiyas Shofar too, thus categorizing it as a Category Three.  It is somewhat strange that the Mishna Brurah makes no mention of the issue in regard to Hilchos Shofar.  He does mention it in passing in Hilchos Megillah of all places (692:15).  There, he equates Megillah to both shofar and lulav.

Eating before Lulav is technically forbidden (SA OC 652:2) as a category three.  The Mishna Brurah in his Shaar haTziyun writes that this is only for eating[1] – tasting is permitted according to the strict halacha.  He explains, however, that one should only be lenient, for a great need (citing the Bikureei Yaakov and the Chayei Odom).  This would put it possibly in a Category Two.

There are some Poskim who are Machmir on some of the earlier one’s and would put them in a Category Two as well.  But most don’t.

What are some of the more full-blown Category Two No Pre-Food Mitzvos?  Reading the Megillah is one, according to the Mishna Brurah (692:14).

So what are some of the guidelines?  The Trumas HaDeshen (#109) explains that if a Mitzvah has an extended period of time in which it can be performed there is a concern that we might push it off further and perhaps forget about it completely.

EXAMPLES OF CATEGORY ONE

What are some examples of Category One No Pre-Food Mitzvos?  Kiddush on either Friday night or Shabbos morning are the classical examples (See SA OC 271).  This is also true of Havdallah.  What is interesting to note is that the Rav Shulchan Aruch, the first Lubavitcher Rebbe, gives us an explanation as to why Kiddush is a Category One and not a Category Two or Three (RSA 271:9).

In this explanation we may find tremendous insight into Chanukah.  He writes that in regard to these Mitzvos their main Mitzvah is at the very beginning of the time period.  Although the Mitzvvah of Kiddush continues throughout Shabbos – its main Mitzvah is at the beginning.  This is also true with Havdallah.  The Mogain Avrohom writes this distinction as well (OC 235).

So let’s get back to Chanukah candles.  From the aforementioned Mogain Avrohom and Rav Shulchan Aruch we might have thought that the main Mitzvah of Chanukah candles is at the very beginning – so the criterion of Kiddush and Havdallah may apply too.  However, the Mishna Brurah himself distinguishes between Biblical main start and Rabbinic main starts in regard to Bdikas Chometz 271:11).  Perhaps one can make an argument that the Pirsumei Nissah aspect of Chanukah makes it like a deoraisah (the Turei Even says such a thing in regard to reading the Megillah), but the Poskim do not mention this.

Nonetheless, the Mishna Brurah does treat Chanukah like a Category One in some way.

According to the Mishna Brurah’s Shaar HaTziyun 672:15, once the actual time for lighting has arrived – then we should not be tasting food.  Why?  Because there are some Poskim that hold that the time to light the Chanukah lights only lasts for the first 30 minutes.  Since we are concerned for this opinion ideally, once that time has arrived we should not mess around and do it right away.  Hence – no tasting.

What about before that time?  One half hour before the time to light actually starts?  Well, the idea of curtailing activity a half hour before is a Rabbinic Mitzvah, and according to the parameters of the Mogain Avrohom (regarding hilchos Minchah) we are not so stringent in regard to this.

There might be three separate time periods in regard to the laws of tasting before Chanukah licht.  Within one half hour before the time to light candles one may taste.  Once the time of candle lighting has arrived  – one should not be tasting anything ideally, but if very necessary one can.  This period lasts until 30 minutes after candle-lighting time.  After this period is over, then one may taste again.

[1] Indeed, even in eating one doesn’t have to wait more than the half day mark and the Chsam Sofer writes that if one is expecting that the lulav is going to be brought to him, he does not have to wait.