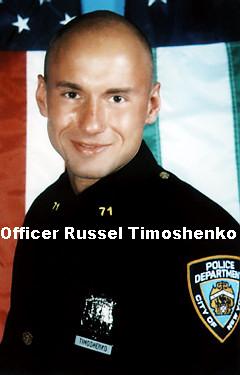 Lee Woods, the third suspect on trial for the murder of New York City police officer Russel Timoshenko, has been found guilty on all charges he faced.

Woods was convicted on charges of aggravated murder, aggravated attempted murder, and two counts of criminal possession of a weapon for the July 2007 shooting in Crown Heights that left Timoshenko dead and his partner wounded during a routine traffic stop.

Woods was the last of three men tried for their separate roles in the incident. I

Prosecutors argued Woods, Robert Ellis and Dexter Bostic acted as a team to shoot Timoshenko and now-Detective Herman Yan because they were caught with a stolen SUV and with illegal weapons in the vehicle. Prosecutors said Bostic shot and killed Timoshenko, Ellis simultaneously hit Yan, and Woods was the driver.

Bostic was convicted of aggravated murder and attempted murder days after his co-defendant Ellis was acquitted on those charges.

Three separate juries heard the case because the men made statements implicating each other.

Ellis dodged a murder conviction, but was convicted on the weapons possession charges.

Prosecutors said Bostic sat in the front passenger’s seat of the stolen sport utility vehicle and shot 23-year-old Timoshenko twice in the face after he approached.

He “waited, waited until Officer Timoshenko was so close that there would be no mistake, no chance for him to miss. He fired the gun twice into the unsuspecting officer’s face,” prosecutor Anna-Sigga Nicolazzi said during the case.

Yan was shot in the chest as he approached the other side of the SUV. His bullet-resistant vest saved his life.

Attorneys for Ellis and Woods each claimed their client was the driver and therefore could not have fired at the officers. Ellis took the stand in his own defense, saying he worried he’d be shot by the officers if he said the wrong thing. His defense attorney Danielle Eaddy claimed Woods was the shooter and law enforcers bent on blaming her client refused to take evidence into account.

But prosecutors said Ellis wouldn’t have skipped town had he been the driver. Woods stayed at his girlfriend’s house after the shooting and was taken in for questioning before the other two were found.

The July 2007 killing sparked a manhunt that spanned several states and didn’t end until two of the men were captured in the Pocono Mountains.

Ellis and Bostic, 34-year-old roommates, were driven to Pennsylvania and planned to hide in the woods and live off peanut butter and crackers, prosecutors said. They were captured after about four days in a patch of trees near Interstate 80. Woods, 29 at the time, did not go with them. Three guns were found in the SUV.