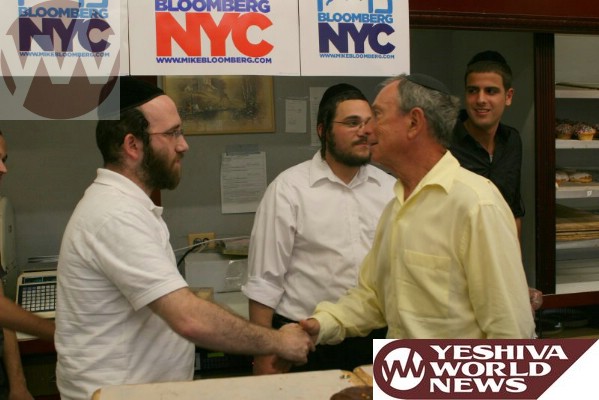 [Click HERE for photos] (VIDEO LINK BELOW) Continuing on his campaign trail, Mayor Michael Bloomberg traveled out of NYC to Upstate New York, and visited Sullivan County in the Catskill Mountains. Travelling with the Mayor was NYC Councilman Simcha Felder, and Mark Botnick who handles Jewish outreach for the Bloomberg campaign.

His first stop was at Camp HASC, where the Mayor spoke with camp directors, and met with many mentally challenged adults & children. The Mayor visited the camp’s gym, where he witnessed the campers play basketball and other sports. The campers were thrilled to meet the Mayor, and quite a few hugged him tightly.

The Mayor posed for a photo with Lakewood Deputy Mayor Meyer Lichtenstein and Camp Directors, and left.

His second stop was at Camp Bnos (an Agudath Israel summer camp), where the Mayor was given a warm welcome by more then a thousand cheering girls in their main ballroom. The Mayor was then introduced, and addressed the packed room.

The highlight of the Camp Bnos visit was when the Mayor was asked to autograph a large painting which had a photo of himself holding a tee-shirt.

At his side in Camp Bnos was Rabbi Meir Frischman, the Director of camp Agudah and camp Bnos, and Rabbi Bernard Freilich, the Special Assistant to the NYSP Superintendent.

Finally, the Mayor travelled to the Town of Woodburne, where hundreds of people were eagerly awaiting his arrival. He arrived with a NYSP escort, and Town of Fallsburg Police were on hand to assist the Mayors security detail.

The Mayor exited his black SUV, and was greeted by cheering supporters. The Mayor was smiling as he posed for photos with those who asked, signed autographs, and proceeded to take a slow walk down Main Street.

He first stopped into the chocolate store, and purchased a nice box full of chocolates, posed for photos with the store owner, and thanked them for their support.

As the Mayor exited the store, a schoolbus filled with Satmar children passed by all holding “Bloomberg For Mayor” signs written in Yiddish. The Mayor smiled, and waved to the children.

The next stop was a fruit & vegetable store, where the Mayor was handed a juicy kosher sour pickle, thanked the store owner and then went next door to the Woodburne Pizza Shop.

The Mayor walked behind the counter, posed for photos, and ordered two pies of pizza. He was joined by supporters at a table, ate a slice, and gave the rest of the slices to children who were packed around his table.

Next was two stops: at the grocery store, and then the Woodburne Bakery where the Mayor was seen smiling and thanking supporters.

Lastly, the Mayor posed for a photo in front of a Catskills Hatzolah ambulance, and a group of Hatzolah Coordinators and Volunteers – including long-time Flatbush Hatzolah member Neil Tepper.

As the Mayor walked back to his SUV, he was given a public endorsement by Jewish celebrity and radio DJ ‘County Yossi’.

“I endorse Mayor Michael Bloomberg for Mayor of NYC”, said Country Yossi. “He’s the best Mayor in the entire country”.

Prior to leaving, the Mayor thanked everyone for their support, took photos with the NYSP Troopers, Fallsburg Police Chief Simmy Williams and officers from the Fallsburg PD, and left back to NYC.

YWN VIDEO LINK: Click HERE for video of the Mayor in Woodbourne.