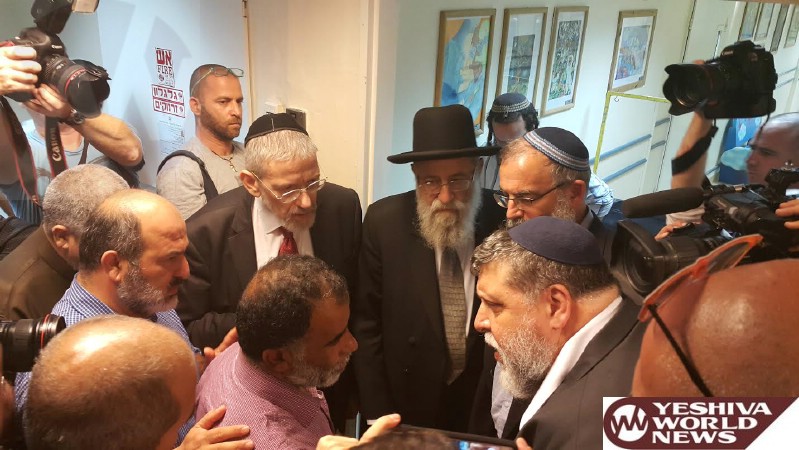 Rabbis affiliated with Tzohar Rabbonim on Monday, 18 Menachem Av, together with clerics of other religions, visited the victims of the arson attack in the PA (Palestinian Authority) village of Duma last week. An infant was burned to death in the attack which left his father, mother and 4-year-old brother seriously burned, an attack that was reportedly carried out by Jews. The police investigation continues.

The rabbonim and a number of other religious leaders arrived at Sheba Medical Center at Tel Hashomer in Tel Aviv to make a statement following the attack. Leading the delegation was Jerusalem Chief Ashkenazi Rabbi Aryeh Stern Shlita, accompanied by Rabbi David Stav and Rabbi Rafi Feuerstein, both of Tzohar. Among the others taking part was Rabbi Michael Melchior, a former cabinet minister.

Rabbi Stern stated “One who claims to represent religion cannot murder. It is saddening that we meet once again on the backdrop of shedding blood. One who murders is not worthy of being a member of society. We all reject this and the idea that this can represent any religion”.

Rabbi Feuerstein added “We gather here to provide comfort. I hope and call to all of us with the hope that this meeting is a first of its kind and that we can have additional gatherings towards peace and brotherhood.

Sheikh Darwish said that this act should be used as a catalyst to create a covenant of all religious leaders against terror and in the name of peace.

The meeting was also joined by MK Abd al-Hakim Hajj Yahya who commended the initiative but said that it is not enough to speak but there must be greater action on the part of religious leaders to condemn acts of terror on all sides.

Prior to departing the hospital, the clerics met with the grandfather of the burn victim and reiterated that their visit was supported by large number of other religious figures. “We represent many rabbis and none of us are willing to stand silent in the face of such a desperate act of evil,” said Rabbi Stern.