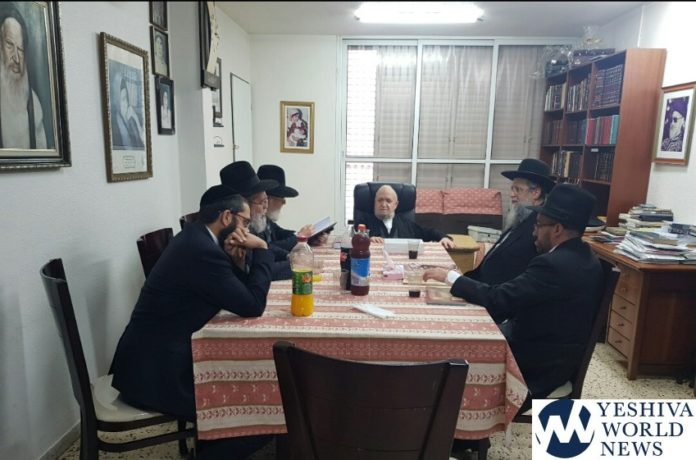 HaGaon HaRav David Yosef Shlita, a member of Shas’ Moetzas Gedolei Torah, was sent as a shaliach of the Torah Council to meet with HaGaon HaRav Meir Mazuz Shlita on Thursday before the deadline for submitting party lists. Rav Yosef hopes to persuade Rav Mazuz to assign a representative of the Yachad party to the Shas list and to run together in the election. The problem is that while Shas continues shouting “achdus”, it comes with a condition, that Rav Mazuz appoint anyone his wishes to the exclusion of Yachad leader Eli Yishai, who is the political nemesis of Aryeh Deri, the Shas party chairman.

Officials released the following statement in the name of Rav Mazuz following his meeting with Rav Yosef. “After Rav Mazuz heard the words of Rav Yosef and the what the Shas Torah Council is offering, the rav agreed to forgo the representation and appointments, all in the name of restoring Sephardi unity, to restore the connection to Torah of the ‘Mesorati’ (traditional) tzibur. The rav explained that true unity would be seeing Eli (Yishai) and Aryeh (Deri), so bring them back home.”

The statement adds that “The rav is unable to comprehend the extent of the opposition to Eli Yishai, for everything he did was with my knowledge, and he always consulted with me on all matters, as well as with Maran HaGaon HaRav Ovadia Yosef, so how can we throw out a straight person like him, only because of personal rivalry. I cannot betray him.

“If Gantz and Lapid can unite, why can’t two people sharing the same daas torah sit on one seat? Instead of exhibiting responsibility and evaluating the dangerous situation that we face, to compel them to sit together, and if there will be tensions there will be a rabbinical team that will reconcile between them and determine if one of them is not acting appropriately.

“After all, everyone agrees that such a union can strengthen Shas, so how can one give up the common good because of personal rivalry?”

The rav clarified, “The past few years have taught us that it is impossible to rely on the conduct. The outline of the Kosel referring to the egalitarian prayer area, which passed first in the name of the Torah Council, and later it turned out that they were not aware of it, the absence [from the vote on the] First Station compound in Jerusalem that opens its doors to Chilul Shabbos, and so forth. We cannot continue supporting this.”

Unfortunately, Rabbi David Yosef conveyed the message that it is impossible to agree to any political role for Yishai. According to the rav, the responsibility rests with Rabbanei Shas, understanding the magnitude of the hour, and forcing Deri to overcome his personal ego.

PHOTO: The Shas Party’s Moetzet Chachmei Hatorah meeting on Wednesday to discuss strategy ahead of the upcoming elections #jerusalem #Israel

Following the meeting Wednesday night, The Moetzas Gedolei Torah of the Shas party gave its stamp of approval to the party’s list for the upcoming election for 21st Knesset.