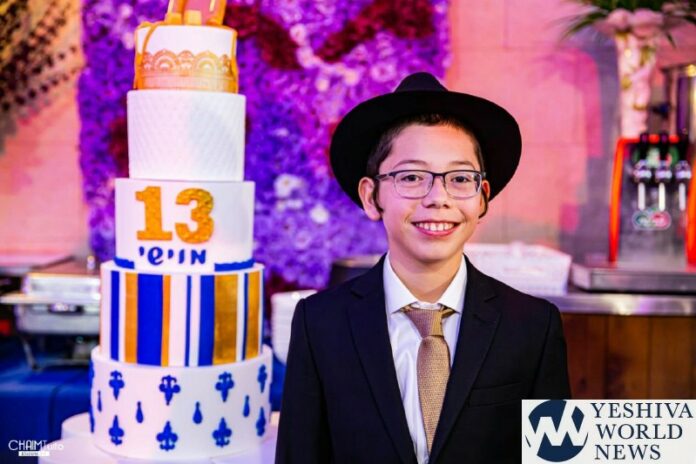 Moshe Holtzberg, who became known to the world during the tragedy that befell his family in the Chabad House in Mumbai, India, celebrated his bar mitzvah with hundreds participating.

In the presence of family and close friends, Moshe celebrated the special day on Sunday in Kfar Chabad, eleven years after that horrific terror attack that claimed the lives of many, including Moishe’s father Rabbi Gabi Holtzberg HY”D and his mother, Rebbetzin Rivki Holtzberg HY”D.

Moshe was remembered being clutched in the arms of his caretaker, Sandra Samuel, who is credited with saving his life.

Moshe was taken in and raised by his grandparents, who have told the

world repeatedly that one day, when he is ready, Moshe will return to Mumbai and resume the work that was begun by his late parents.

Moshe’s bar mitzvah was held in the same place where his parent’s levaya was held eleven years earlier.

As is the minhag in Chabad, the grandfather, Rav Shimon Rosenberg of Afula, invited Moishe to recite his ‘maimer’, and the chosson bar mitzvah did not disappoint.

Among the entertainers participating in the event were Avraham Fried and Moti Steinmetz.

Congratulatory messages were sent by many, including Prime Minister Binyamin Netanyahu and his wife and US President Donald Trump.

Prime Minister Netanyahu and his wife Sara recorded a video to congratulate Moshe Holtzberg on the occasion of his bar mitzvah at Kfar Chabad.

Prime Minister Netanyahu:
“We know that there is life amidst this tragedy. There is revival and there is hope. You come now with the love of the entire Jewish people, all citizens of Israel and very many outside Israel. I would like to wish you that you are faithful to your people, your country and your family, and that you continue with a good and happy life. Mazel tov, Moshe!”

Sara Netanyahu:
“Mazel tov Moshe. We know that you suffered a terrible disaster when you were two. From that age you have been fighting every day to carry on with life. But you are surrounded by so much love from your grandparents. All Israel is with you.”

In honor of the occasion of his bar mitzvah, Prime Minister of India Narendra Modi sent a letter of blessing to Moishe in which he included a special blessing wishing Moishe should be successful in fulfilling his dream of coming back to Mumbai as the Chabad shaliach to the city.

Modi continued in the letter: “Your story continues to be a source of inspiration for all of us.” 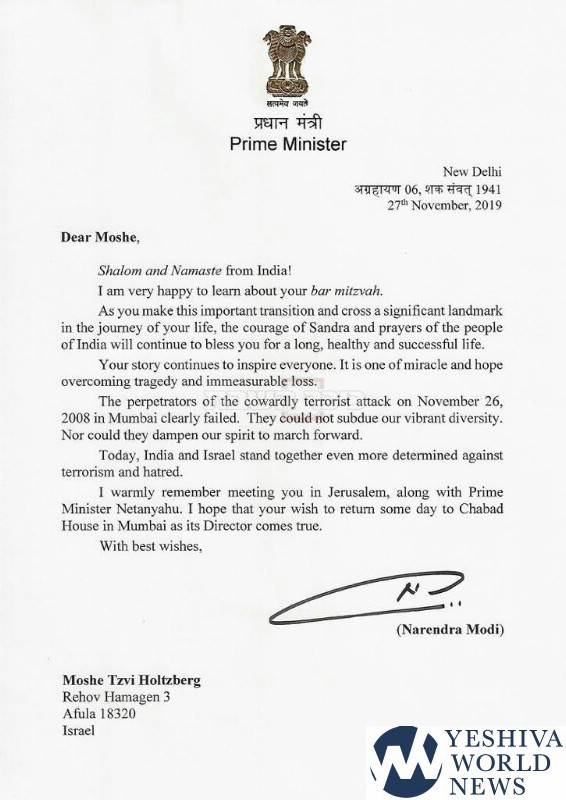