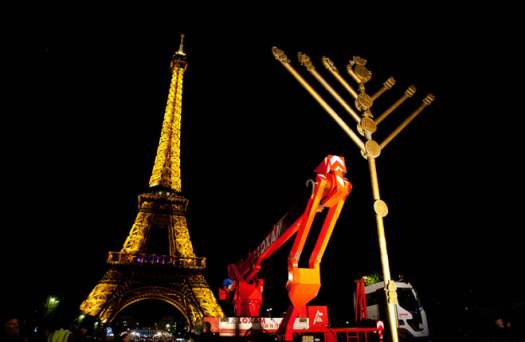 During the Chanukah season, we see a major proliferation of Menorah lighting in public areas. For many years now, Lubavitch Chassidim have propagated the public display of Chanukah menorahs throughout the United States, Canada, and even Europe. In the headlines recently, for example, the Eiffel Tower had hosted a well-publicized menorah lighting ceremony. Some people embrace this proliferation and label it as Pirsumei Nisa. Others claim that there is no Mitzvah of Pirsumei Nisa being fulfilled here, and they have expressed animadversions about the church and state issues and controversies that the publicity has engendered. A few readers have actually requested that the topic be addressed in a Five Towns Jewish Times article.

THE VIEW THAT THERE ISN’T PIRSUMEI NISA

THE VIEW THAT THERE IS PIRSUMEI NISA

On the other hand, one of the Rishonim, the Sefer HaNiar, writes that there is a Pirsumei Nissah for gentiles. This is also the view of the Hisorerus Teshuva (Vol. I #153) as well as the Sefer Beis Pinchas (by the author of the Pischa Zuta).

This could be borne out by the verse in Yechezkel (38:23), “Thus will I magnify Myself, and sanctify Myself, and I will make Myself known in the eyes of many nations; and they shall know that I am Hashem.”

Rav Yerucham Olshin Shlita (Yerach LaMoadim page 438) writes in his Sefer that there is, in fact, Pirsumei Nissah for gentiles on Chanukah, but not on Purim. His explanation is that the Greeks tried to export their pantheistic theology all over the world. The Jewish nation merited the 8 days of miracles in Chanukah to counter this Greek heresy that was spread throughout the world. The Pirsumei Nissah is, therefore, to spread the belief in the Oneness of the Creator throughout the world.

HOW DO WE TRANSLATE THE WORD “TARMUDAI”

The debate may depend upon how we translate the word “Tarmudai” that appears in the Gemorah in Shabbos 21b. The Gemorah explains that the end time in which the Chanukah licht may be it is until there is no more Tardumai traffic in the street. What does “Tardumai” mean? Are they a nation that gathers thin wood, as Rashi explains or are they a subgroup of Jewish people?

POSSIBLE DEBATE BETWEEN RASHI AND RAN

Rashi says that these Tardumai gather thin wood. They wait until the people go home and light their fires. When the people run out, they go back to the “late” market and get some more wood from the Tardumai people. It was kind of like a Talmudic era 7-11 convenience store. The key point, however, is that Rashi identifies them as foreigners and that seems to be the pivotal issue – that there is a pirsumei nisah for gentiles.

The Rif (tractate Shabbos page 9 in the Rif’s pagination), however, identifies them as Jews. How so? He identifies the wood under discussion as Tarmuda. Thus the collectors of the Tarmuda wood are called Tarmudaim.

On the other hand, it could very well be that Rashi just happens to know that they were gentiles, but still may hold that Pirsumei Nissah applies only to Jews. And it could also very well be that the Rif just happens to know that they were Jewish, but he could be of the opinion that Pirsumei Nissah also applies to gentiles. How so? It could be that when the Tardumaim are still around to sell the wood – the Jewish customers are still around looking to be the buyers. These arguments are presented by Rav Nosson Gestetner zt”l (L’horos Nosson Vol. IV #63) and Rav Moshe Shternbuch (Moadim uZmanim #141).

Interestingly enough, however, Rav Elyashiv (Sheves Yitzchok Chanukah chapter 4 cited in Pninim M’Bei Midrasha siman 99) zt”l suggests that it is unlikely that the pirsumei nissah is on account of the customers of the Tardumaim since the retailers generally stay later than the customers. Rav Chaim Kanievsky Shlita (in Taamei D’Kra after Parsha Vayeshev) is of the same opinion. Thus, it seems that Rav Elyashiv zatzal and l’havdil Rav Chaim Kanievsky Shlita both seem to understand Rashi and the Rif as debating this point.

Thus, we see that notwithstanding seemingly categorical statements about whether or not there is Pirsumei Nisa to gentiles, there is clearly a halachic debate about the issue. Rav Feinstein zt”l held that there is not, but other leading Torah figures held and hold that there is.

ISSUE #2 – PARAMETERS OF THE PRISUMEI NISA

By the same token, it is clear that the obligation of Chanukah lighting is within the dwelling of the house (See Rambam Hilchos Brachos 11:2-3). While it may be incumbent upon the person to ensure that he is in a house, there is no obligation outside of the venue of the home.

It is also true that the Mitzvah of Pirsumei Nisa is only fulfilled when and where there is an obligation to light. Lighting a Menorah publicly in a venue that is not a house with a dweller who is fulfilling his obligation to light is tantamount to taking a full page ad out in the New York Times saying that the mirace of Chanukah happened. This is not to say that there is something wrong with such an advertisement per se. Indeed, taking pride in our religious beliefs is a very positive thing. But it should be understood that this is technically not a fulfillment of Pirsumei Nisa. Since it is not the fulfillment of a Mitzvah, however, the issue must be weighed carefully in every time and place. A lichtiga Chanukah!

PLEASE NOTE: A number of Shluchim have explained to this author that their primary intention is for Pirsumei Nisa to unaffiliated Jews and not for gentiles.