The last Meron victim to be buried was the Argentine bachur Avraham Daniel Ambon, 21, z’l, a talmid of Yeshivah Heichal Yitzchak (Landau) in Jerusalem, whose levaya was held on Monday morning after his family members arrived from Argentina.

The levaya left from the yeshivah in Kiryat Yovel to Har Hamenuchos. The Rosh Yeshivah, HaGaon Rav Yisrael Landau, was maspid his talmid and the other Meron victims. “Beloved bochurim who haven’t sinned rolling on the steps like stones,” the Rosh Yeshivah said tearfully.

“Your parents sent you to Eretz Yisrael to learn Torah. We thought we’ll meet your parents under a tallis of a chuppah and instead you’re here wrapped in a tallis.”

“We don’t know the cheshbonos of Shamayim but we have a question to which we have no answer – of how these illuminated faces were hurled to the ground. Avraham – how aidel he was, tznius, anava. Avraham, you’re a ben Olam Haba.” 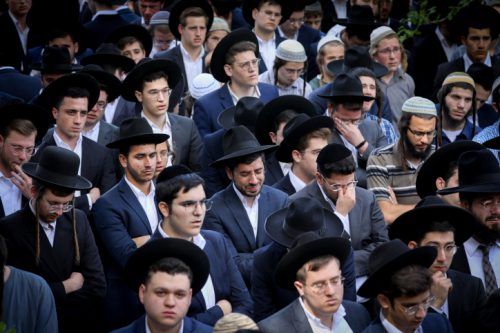 “When Hakadosh Baruch needs to take such a beloved soul, it’s difficult for us, it’s difficult for the whole world. Why did the King descend to His garden to pluck 45 flowers amidst a chag? There’s a Borei Olam and He knows what He’s doing and whom He took. And when you recognize that, you understand the purpose.”

“Dear parents. I wanted to return your son to you as an avreich. The entire world is in tzaar – from Argentina until Eretz Yisrael.”

Avraham, z’l, had been learning in Eretz Yisrael for four years.