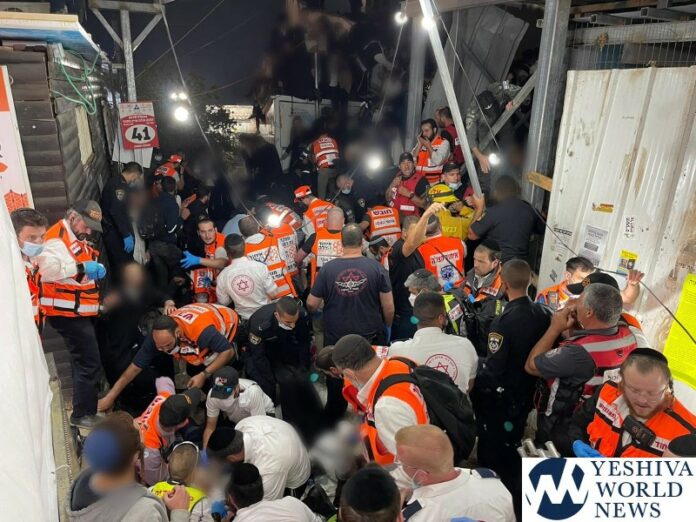 Maor Tzur Ish, a journalist from Channel 13 news published a report regarding a catalyst that may have been the cause of collapse that claimed the lives of 45 people in Meron and turned the holiday of joy into a day where Israel witnessed the largest civilian disaster of its history.

According to Tzur, according to numerous people present at the location, the initial cause of what became the collapsing crush of people that killed both young children and older men, was one of the celebrants suffering a heart attack and collapsing in the first row.

Tzur explained that according to numerous witnesses who were rescued from the incident, no one was in the passageway, not even the police, when the throngs were coming down from the grandstand. The police were in the lower section of the compound.

A man collapsed after suffering an apparent heart attack. Participants who saw this, screamed for help from the police and from the medical teams who were present. They attempted to pick up the man while at the same time they stopped the masses from coming down the passageway. This is what caused the bottleneck and the eventual collapsing wave of the people trampling one another to death. According to these same eye-witness reports, the police were attempting to stop the throngs of people from trampling the man who had collapsed and those trying to help him and for that reason they closed part of the passageway.

This version of events makes a lot of sense with regard to how things developed and how such a stampede was possible while all of the barriers collapsed.